It is the beginning of a new school year! The first day of school always seems to sneak up on me and while I've carefully prepared the lessons, I never feel quite ready. We don't really do grade levels anymore, but according to their ages, Bridget is in 5th grade, George is in 3rd, Liam is in 1st grade. Juliette, being nine months old, is just along for the ride.

We started our day with a prayer and our morning basket. I'm making it a priority for the children to memorize scripture and other great works. George and Liam are also working on memorizing the Pledge of Allegiance. Also, since Juliette is getting older and more attentive, we've begun singing a couple of songs with her so that she can feel included in our school day. This along with some stories is how we start our mornings. 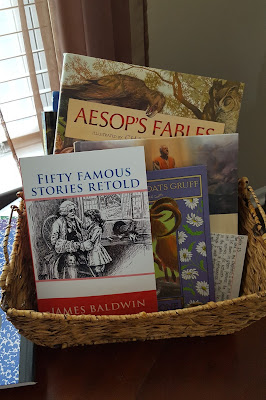 We began studying our first composer, Wolfgang Amadeus Mozart. We listened to his piece, "Eine Kleine Nachtmusik". The children were familiar with the tune but loved listening to it all the way through. We continued to listen to it multiple times throughout the week. It is Juliette's personal favorite and she jumps up and down in her bouncer when she hears it.


The piece is written for strings only, and it's wonderful to hear how the violas, violins, and cellos sound so well together. The lack of an entire orchestra makes it a simple piece, but so lovely. Perhaps it is because we've listened to it so much this week, but it is now one of our favorites! To learn more about Mozart himself, we read Young Mozart by Rachel Isadora. 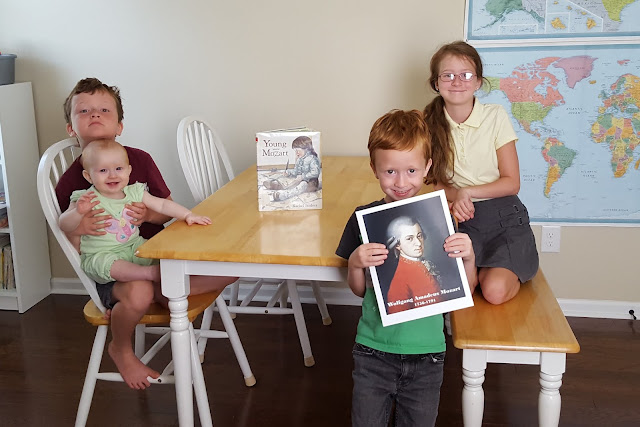 Robert Louis Stevenson is our poet for this first term. We read his poem, "Farewell to the Farm". The children did some drawing while I read.

We read The Garden of Monsieur Monet by Pia Valentinis as we began our study of Claude Monet. This week, we're focused on his Water Lilies series. In lieu of our personal development projects, we spent the afternoon painting. The children did their best attempts at painting their own water lilies. George wanted to make an attempt to resemble the painting I had printed off the computer. I think he did a good job. Bridget and Liam also did well with their painting. They all used water color paints instead of the oil paints Monet used. I felt this would be easier for them. I don't think of myself as an artistic person, so this goes to show that even talent-less parents can teach their children the arts! 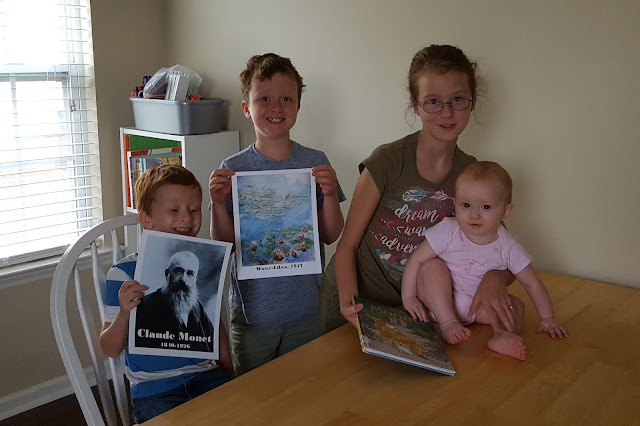 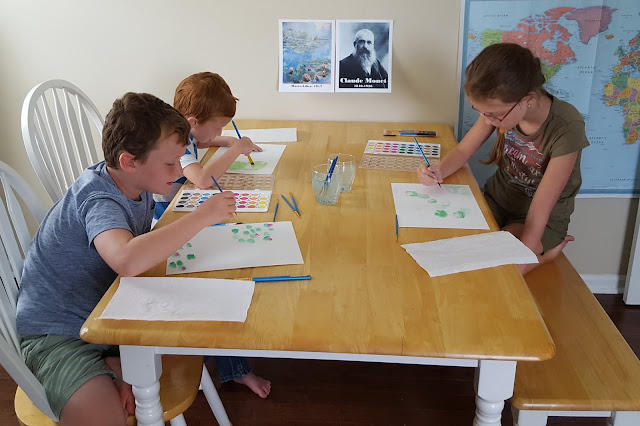 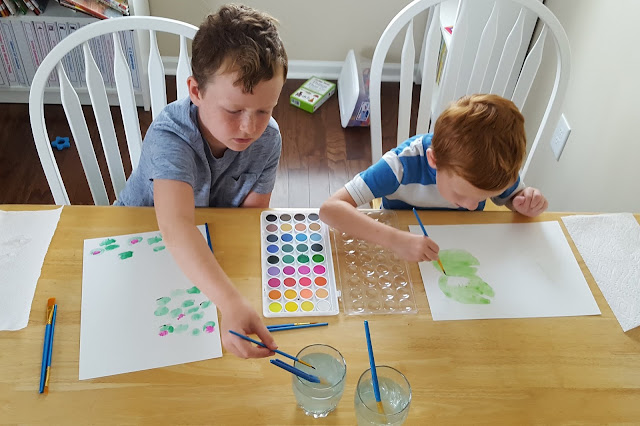 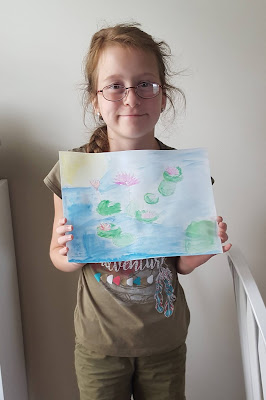 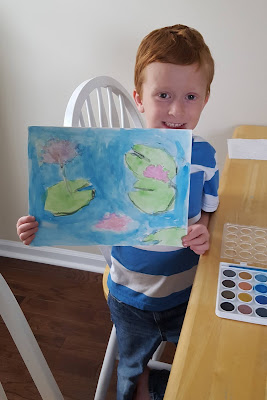 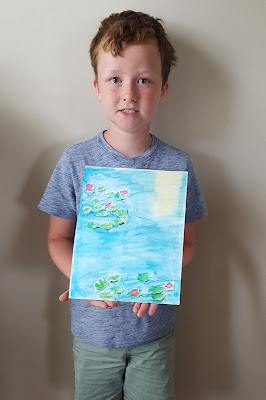 We were supposed to learn about Egypt on Thursday, but due to an unexpected family thing going on, we skipped this. Hopefully we'll study Egypt on a random day next week.

Since we're including the scriptures as part of our study of ancient history, we picked up where we left off in the book of Exodus. The children love dressing up for history lessons and were eager to put on their costumes. We reviewed how the Israelite's came out of Egypt, read the story of the Ten Commandments from the scriptures, and discussed each commandment. We also read about the golden calf (I bravely let the children use glitter for their golden calf) and the Tabernacle, finishing off the book of Exodus. The children watched a short documentary about the Tabernacle, and then to end our week we read the story of Aaron's staff/rod blossoming, found the book of Numbers. The children made a "budding staff". We'll later learn how this rod was included in the Ark of the Covenant that the Israelites kept with them for centuries to come. 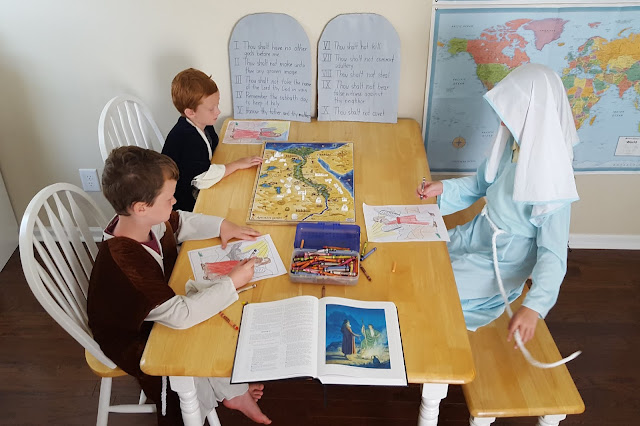 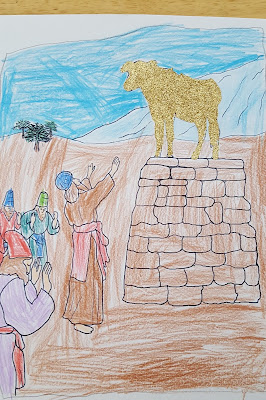 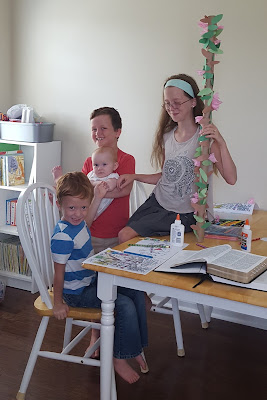 We studied animals habitats, created a new habitat board, and learned about animal diets. I used the same board from the first time we studied habitats when Bridget was in first grade! It's mostly the same but with a fresh new look. 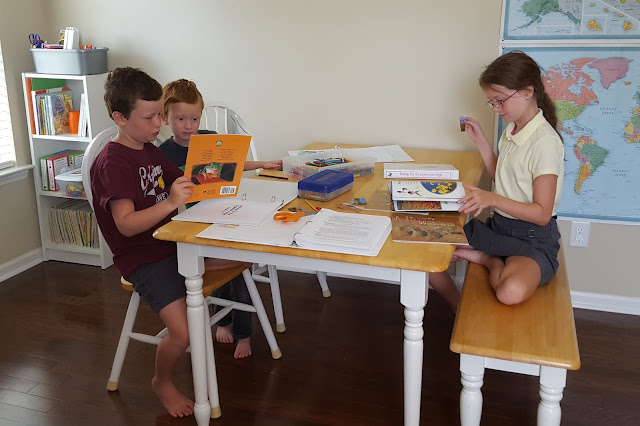 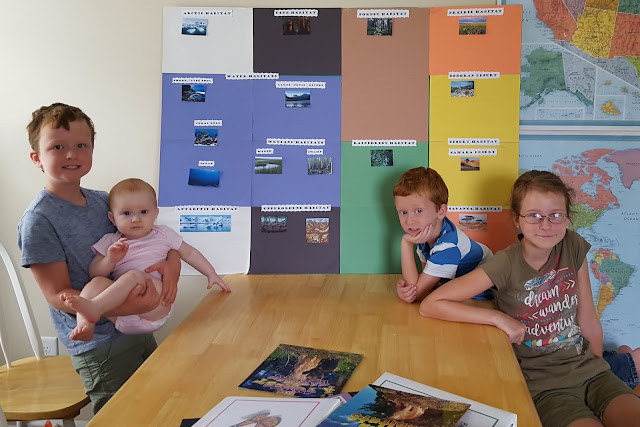 The children do quite well in math. Our math book contains 30 lessons but our school year consists of 36 weeks (or 42 weeks when we include a light summer session), I'm stretching the lessons out by having the children complete only one page per day, rather than two. Bridget was especially happy about this, as her math problems take a bit more time to complete. Liam and George have still completed extra pages on their own. 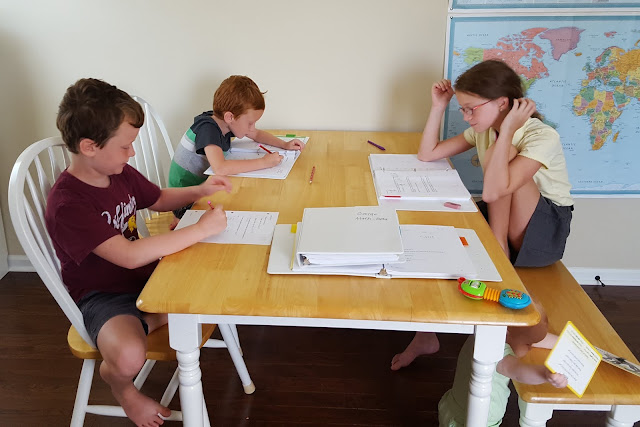 Juliette sometimes keeps the children company under the table. She's a busy body! 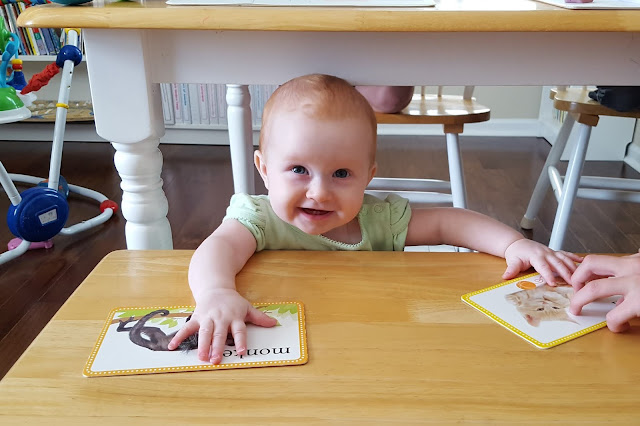 We scrapped our old language arts curriculum and are now using McGuffy Readers. During the beginning of the quarantine period in March, the children watched and completed all nine seasons of The Little House on the Prairie. If you're familiar with the schoolhouse scenes, you may remember Miss Beadle (and later Miss Ingalls/Mrs. Wilder) telling the children to turn to page such-and-such in their McGuffy's. My children had so many questions about these so we bought one to see what it was all about. The children took to them and begged that we give them a try. I bought the entire series and we began using them formally this week. We're able to use them for reading, copywork, handwriting, dictation, spelling, and grammar. So far, all of the children are very pleased with them.

During COVID-19 and my husband being home for lunch, we had switched to a large midday meal and a light supper. Now that school has begun, the children have requested that I go back to making "school lunch". I took my teacher hat off and put on my lunch-lady hat and prepared lunch. I only took a picture of their first day of school lunch. We had family over on the weekend and had leftover ingredients for sub sandwiches. It is one of their favorites, so they were happy with their meal. 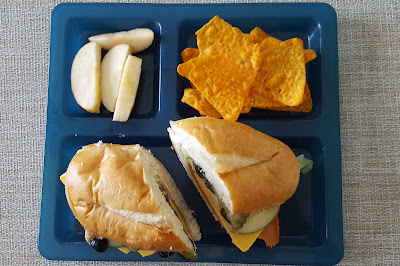 We're done with school by lunch time but the children are always asking for something to do to keep them busy while the baby naps. Bridget has asked to learn how to sew and George wants to learn how to build things. Liam didn't want to learn anything special and has chosen to take this time to play in his room. 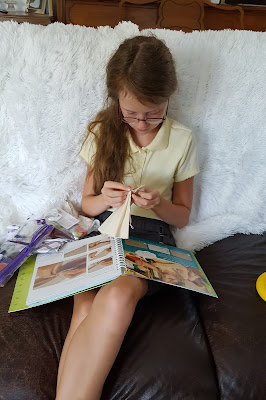 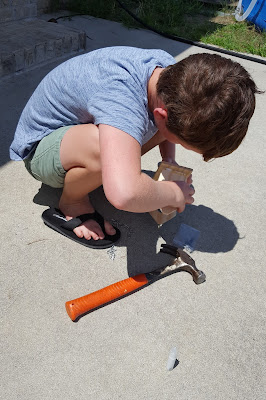 Tea time is back! We had cucumber sandwiches, turkey and cheese on crackers, and cookies along with herbal tea. This was Juliette's very first tea time and she was excited to join in. She was well-behaved and quiet as I read a story from The Complete Collection of the Brothers Grimm. 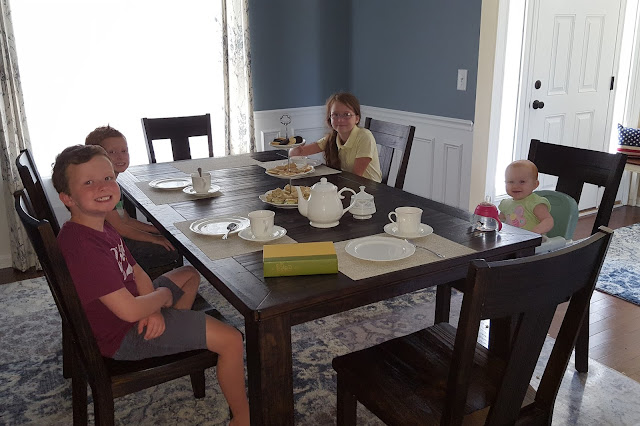 Monday was the only day we had tea time. On Tuesday, Bridget went back to the office with my husband after lunch to watch the last of the Harry Potter movies, as she had finished the book the night before. Things got a little crazy after Wednesday with some family stuff.

I hope you enjoyed reading about our first week back at school!
Posted by Jenny at 4:12 PM 1 comment: