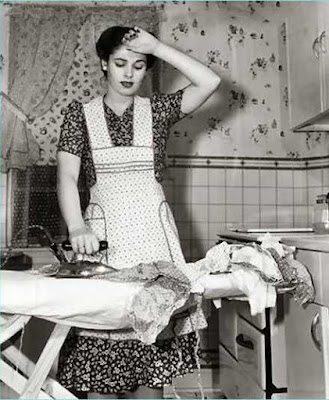 I was not raised in what I would consider a traditional household. I was an only child, and my mother worked long hours as a nurse while my father worked from home as a carpenter. My mother was home long enough to eat, sleep, and prepare for her next shift at the hospital. Housekeeping chores were shared by all of us, though they were not done on a regular schedule and areas of our home were often neglected. A good cleaning was usually done when my mother had company coming over, which was once every few months. Meals were cooked primarily by my father, though when my mother was home she would sometimes cook. I also had many TV dinners growing up, and meals were seldom eaten at the table. We did not say grace nor did we eat together.


My father's upbringing was quite different. His mother, my grandmother, was a traditional homemaker. She did all of the cooking, cleaning, gardening, and child rearing, though my grandfather took care of the discipline for any severe offenses.

My mother's upbringing was similar to mine, though she had two younger brothers to share it with. She spent her younger years on a farm, across the road from her grandmothers farm. Her father had serious health complications throughout his adult life, and he worked from home. He did carpentry and a bit of mechanical type work. My grandmother worked outside of the home. After my grandfather died, my grandmother moved her three children to town. She continued to work outside of the home, and she died shortly after her husband.

When I married my husband, we decided that once we began having children that I would stay home with them. As for his upbringing, his mother stayed at home until my husband was school-aged, and she returned to teaching full-time. This was going to be our plan until we decided that providing our children with a home education would be best. For the first few years of our marriage, my husband and I both attended school and worked. Due to my husband abruptly quitting his job shortly after we had our first child, I went back to work full-time while he stayed at home with the baby and studied for the exam to be admitted into the master's program at our local university.


Everyone's situation is different and it is not always easy to decide what is best for each family. Our decision of adhering to traditional Christian roles (father works to provide for the family while mother stays home and cares for the children and the home) has not come without sacrifice. We've had our share of financial struggles over the years and moments where I've been completely overwhelmed with household duties. Homemaking is not something I was trained from childhood to do.

While I look at my grandmother's life for guidance in becoming a homemaker, I am also learning the ropes of homemaking on my own. It hasn't always been easy to create the perfect home life for my family, and it can be overwhelming, leaving me feeling that I am starting from scratch. It is a process of self-sacrifice, but I know that it is what I have been called to do. The blessings of being a wife, mother, and homemaker far surpass anything I could ever desire.

Email ThisBlogThis!Share to TwitterShare to FacebookShare to Pinterest
Labels: homemaking