Neal A. Maxwell said it best when he stated,

“As people become harder, they use softer words to describe darker deeds.”


One of those softer words that describe a darker deed that comes to my mind is abortion. Abortion is, no matter how you word it, the killing of another human being.

God has commanded us, in the simplest of terms, “Thou shalt not kill.” (Exodus 20:13) Jesus Christ himself repeated the commandments given to Moses when he spoke to the Pharisees (see Matthew 19:18).

The value of life is sacred in the eyes of God. He created us, in his own image, and foreordained us. He knew us in the pre-existence, before we were even in our mother’s womb. When speaking to the prophet Jeremiah, he says,

“Before I formed thee in the belly I knew thee; and before thou camest forth out of the womb I sanctified thee, and I ordained thee a prophet unto the nations.”  (Jeremiah 1:5)


Ladies, please do not belittle the life that has been created within you. It is not merely a “lump of cells”. It is a human life, given to this world, through your sacred womb. You must cherish it; protect it. Do not allow the feminists of these modern days convince you that it is entirely your body and your choice. They do not understand, nor believe, in God’s sacred laws. Their ideas and immoral principles are entirely selfish. As Christians, we should know the role that we have as women placed upon this earth. We possess one of the greatest and most sacred powers, given directly to us through our Father in Heaven. 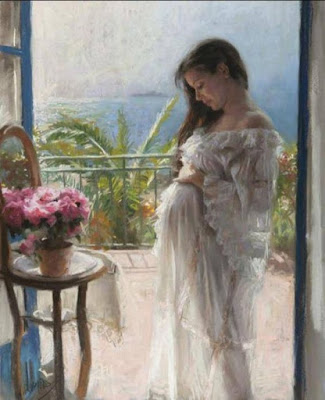 “Lo, children are an heritage of the Lord: and the fruit of the womb is his reward.”


Not only are children given to us by God, but they are given to us through our sacred bodies. The Lord has declared our bodies, both of men and of women, as a temple of the Holy Ghost. The Spirit dwells within us when we welcome it. We are to not only glorify God through our words and deeds, but also through the care and respect of our bodies.

“What? know ye not that your body is the temple of the Holy Ghost which is in you, which ye have of God, and ye are not your own? For ye are bought with a price: therefore glorify God in your body, and in your spirit, which are God’s.” (1 Corinthians 6:19-20)


Your body and your spirit belong to God. When a child resides within your womb, that child also belongs to God. What a joy and an honor it is to bear the fruit of the womb!

Does God ever refer to abortion in the scriptures? Russell M. Nelson stated:

“Abortion sheds innocent blood. Now, as a servant of the Lord, I dutifully warn those who advocate and practice abortion that they incur the wrath of Almighty God, who declared, ‘If men… hurt a woman with child, so that her fruit depart from her… he shall be surely punished.”

“If men strive, and hurt a woman with child, so that her fruit depart from her, and yet no mischief follow: he shall be surely punished, according as the woman’s husband will lay upon him; and he shall pay as the judges determine. And if any mischief follow, then thou shalt give life for life, Eye for eye, tooth for tooth, hand for hand, foot for foot, Burning for burning, wound for wound, stripe for stripe.”


The ridding of an unwanted pregnancy was a grave sin in biblical times, and remains a grave sin today. There were consequences then and there are consequences now. Even while modern laws condone the act of abortion, and even support it, the laws of God remain unchanged.

“Sin, even if legalized by man, is still sin in the sight of God. His doctrine is not ours to change.” –Russell M. Nelson


While the majority of abortions are performed out of convenience, some are justified by women, even followers of Jesus Christ, for various reasons. These reasons are not to be taken lightly, and my heart goes out to women who are put in these difficult situations. Rape is one such reason a woman may consider an abortion as her only option. However, the scriptures state:


This includes children that are still in the womb. Regardless of what modern society teaches, a mother does not have the right to terminate her pregnancy (or put her child to death) because of the sins of the father. The rapist, or the father, should no doubt be punished for his sins. The child, however, is innocent. Do not allow the child to suffer for the sins of his father.

In the event that a child, while still in the womb, is discovered to have a birth defect or deformity, modern society states that we shouldn’t allow this innocent child to suffer the pain caused by such defects and should terminate the pregnancy as it is the only “humane” way to deal with the child. This is wrong! Remember, we are all created by God. In Exodus 4:11, God states:

“And the Lord said unto him, Who hath made man’s mouth? or who maketh the dumb, or deaf, or the seeing, or the blind? have not I the Lord?”


For reasons unknown to us, God creates individuals with these defects or deformities. I share with you that my own son was born with a very serious heart defect, that would have caused him to depart this earthly life at a young and tender age were it not for modern medicine to heal him. Had I known of this trial ahead of his birth, I still would not have terminated the pregnancy. If knowing that even modern medicine could not heal him, I still would have delivered him, loved and cherished him, for the precious minutes, hours, days, months, or years that he had been gifted to me. Heavenly Father alone is the authority on how and when to take back an innocent child, or any human life. Until he decides the when, we are to love.

“The ultimate act of destruction is to take a life. That is why abortion is such a serious sin.” –Dallin H. Oaks


Regardless of what modern society tells us about abortion, do not be fooled. Abortion, and those who support it, attack womanhood, motherhood, and families, and will continue to do so until we speak out.

“People hate the truth for the sake of whatever it is that they love more than the truth. They love the truth when it shines warmly on them, and hate it when it rebukes them.” –St. Augustine of Hippo