This Portuguese confection has been one of my favorites since as long as I can remember. I didn't only have it on Malasada Day (also known as Fat Tuesday or Mardi Gras). Every time we made a trip from Hilo to Kona, we'd stop at the famous Tex Drive In in Honoka'a on the Big Island of Hawai'i for their malasadas. As I got older, I became a little bit of a Tex Drive-In snob because their malasadas were shaped too perfectly. I much preferred the ugly, misshapen malasadas that were homemade. But, any malasada is going to be quite tasty. (I've since forgiven them for their mass production of malasadas).

So what exactly is a malasada?

Malasadas originated in the Madeira Islands region of Portugal. It is a yeast dough that is deep fried in oil and coated with sugar. They are also known simply as Portuguese doughnuts. The Portuguese that immigrated to Hawai'i brought this special recipe with them, and that is how it became popular in Hawai'i. Fat Tuesday is known as Malasada Day in the islands, because the Portuguese (a very Catholic bunch) needed to use up their sugar and lard in preparation for Lent. My great-great-grandmother, Maria Caldeira immigrated from the Madeira Islands to Waialua, Hawai'i with her parents in 1888. I do not know if the family recipe I have came from her or if it came from another family member.

When I switched to a plant-based diet, I thought I'd never be able to enjoy a malasada again. But a few years ago, I changed that. I woke up one morning determined to turn my family's malasada recipe into a egg-free and dairy-free one. Honestly, I didn't think I could do it because the recipe calls for SIX eggs! When it comes to vegan baking, it's very easy to substitute 1 egg, and it can start to get a little tricky when you're trying to substitute 3 eggs. I had to do double that! I used two separate substitutions for the eggs: dairy-free yogurt and ground flax seeds. I also had to substitute the evaporated milk with coconut milk (this part wasn't as intimidating). 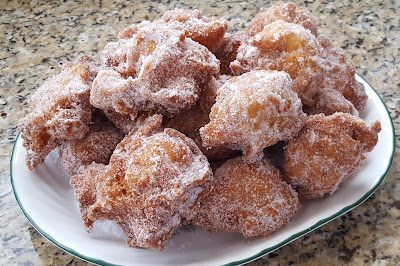 3. Beat yogurt, flaxseeds + water, and coconut milk, and water in with the flour mixture.

4. Add yeast and mix well. Dough will be sticky. (If the dough is too runny, add a bit more flour.)

5. Cover and let dough rise until doubled (about 90 minutes), then punch down. Let dough rise a second time (about an hour).

6. Heat oil in deep fryer to 375 degrees. Dip fingertips in bowl of oil then pinch off golf ball sized pieces of dough.

7. Drop in heated oil and cook until golden brown on both sides. Drain on paper towels and roll in sugar-nutmeg mixture. Serve immediately.

Tip: Be sure to check the inside of your first malasada to make sure it is fully cooked. Just because the outside is nice and brown does not mean it is done! 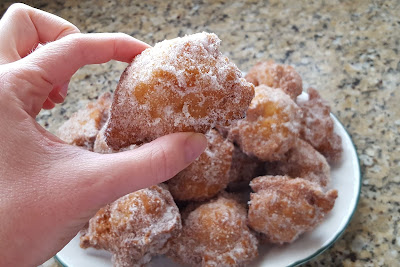 I hope that you enjoy this family recipe and tradition as much as my family does!