December was a promising month for reading. I brought out our box of children's Christmas books and the boys read a lot of those throughout the day, cozied up on the couch or on the floor. My nine year old and I made a trip to the library to load up on other books.


My nine year old finished the last three books of the Sarah, Plain and Tall series: Caleb's Story, More Perfect then the Moon, and Grandfather's Dance. She was so sad for it to end, but I am glad that she found a book series she loved. She also read The Boxcar Children and wants to read more from that series as well.

I read all three of The Ballantyne Legacy series by Laura Frantz, one of my my favorite Christian historical fiction authors.

I love a good generational book series. It's sometimes hard to follow along, especially if you don't read them one after the other, but it's also nice to revisit the characters and see what they've been up to. This series spans about 50-60 years, starting just after the American Revolution in York, Pennsylvania, and ending just before the American Civil War in Pittsburgh, Pennsylvania.


I also read this western Christian fiction book by Mary Connealy. I've always found her older books to be light and humorous, though her newer books are more serious with just a touch of humor. This one was funny. I then wanted to read a couple of Christmas-time books this month, so I found 12 Days at Bleakly Manor by Michelle Griep and An Endless Christmas by Cynthia Ruchti. The first was very intriguing. It took awhile to figure out what was going on, because some of the characters were just so out there. The second book was short and sweet. Totally not a normal family, but still a pleasant read.

There are two more books I'm currently reading, but will not finish them before the end of the year, so I'll save those for January's post. I'm also looking forward to starting another read-aloud with the children. I lost my voice in mid-December and have had a cough ever since.

We've already loaded up on library books for the month of January and are eager to start those. Happy reading!
Posted by Jenny at 4:20 PM No comments:

Email ThisBlogThis!Share to TwitterShare to FacebookShare to Pinterest
Labels: books

Don't think for a minute that just because these are vegan
that they are healthy for you. They're not. But they are a
tasty sweet treat that we deserve to give ourselves
every once in awhile. 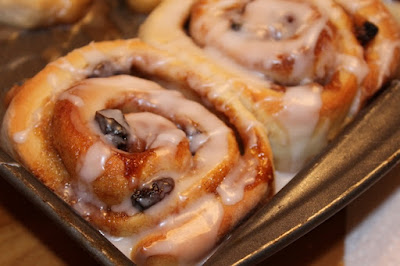 Directions
1. In a small saucepan, heat soy milk, ½ cup sugar, salt, and margarine over low heat until the margarine is just melted.
2. Remove from the heat and add the vanilla. Let it cool down until warm to the touch.
3. While butter mixture is cooling, place the warm water, remaining tablespoon of sugar, and yeast in a 1-cup glass measuring cup. Stir for a second or two and set aside for about 10 minutes.
4. In a stand mixer, combine the butter mixture and the yeast mixture, and beat at medium speed for about 1 minute.
5. Reduce the speed to low, and add 2 ½ cups flour. Mix for about 2 minutes and add 2 more cups flour. Beat for 1 more minute.
6. Remove the dough from the mixing bowl. Place it on a floured surface and knead for about 2 minutes with your hands.
7. Place the dough in a large well-oiled bowl and rotate the ball of dough so it is completely covered with the oil.
8. Cover with a dry kitchen towel and place in a warm part of the kitchen. Let it sit until it has doubled in volume, about 1 ½ hours.
9. Remove the kitchen towel and punch in the center so that the dough deflates. Take the dough out and put it on a floured surface, cover with the kitchen towel, and let the dough rest for about 10 minutes.

Filling and Assembling the Cinnamon Rolls

Directions
1. Lightly grease a 9 x 13-inch pan.
2. Roll the dough out on a lightly floured surface into roughly a 20-inch x 13-inch wide rectangle.
3. Combine brown sugar, sugar, and cinnamon in a small bowl.
4. Brush or spread the melted butter over the entire surface of the sough.
5. Sprinkle raisins and the sugar mixture evenly over the surface.
6. With the long end towards you, roll the dough up evenly. With the seam side down, use a sharp knife to cut the log in half. Then cut each half into six equal pieces. (You will have 12 cinnamon rolls.)
7. Place the rolls, cut side up, into the prepared pan, in 4 rows, with 3 rolls in each row, leaving some space between them.
8. Cover with a towel and place in a warm place until they have risen and expanded, about an hour.
9. Meanwhile, preheat the oven to 375 degrees.
10. Bake, uncovered, for 20 minutes. Let the rolls cool for about 10 minutes.

Directions
1. Combine powdered sugar and water, and whisk until smooth.
2. Drizzle the glaze over the warm cinnamon rolls.

My "comfort food", sure to remind me of my Portuguese roots,
and made healthy (and cholesterol-free) by omitting the ham hocks and linguiça.
The flavor is still amazing! 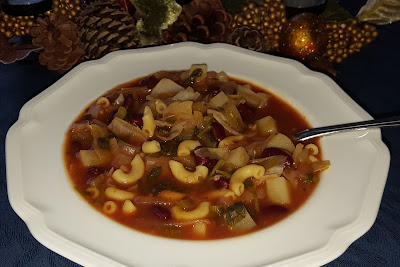 Directions
1. In a large pot, combine onion, celery, garlic, potatoes, tomato sauce, and kidney beans.
2. Add about 4 cups of water, enough to cover the potatoes, and simmer until potatoes start to become tender.
3. Add cabbage, watercress, macaroni, parsley, salt, pepper, and remaining 4 cups of water.
4. Simmer for about 10 minutes or until macaroni is tender.


This recipe makes a lot of soup, and it freezes well!