Happy "First Day Back at School"!!! With our 6 weeks on, 1 week off (with extra weeks off at Christmas) schedule, starting in July works best for our family. It's too hot to play outside, so why not do something productive?

Everything is so different this year. The Rascal (4) is now old enough to join us and not be a distraction. He does well listening to stories, coloring, and participating in discussions. For our first day of school, we began with "Morning Time", then moved on to Scriptures/History. While I read all five chapters of 1 John, the children colored, briefly stopping to tell me their thoughts. 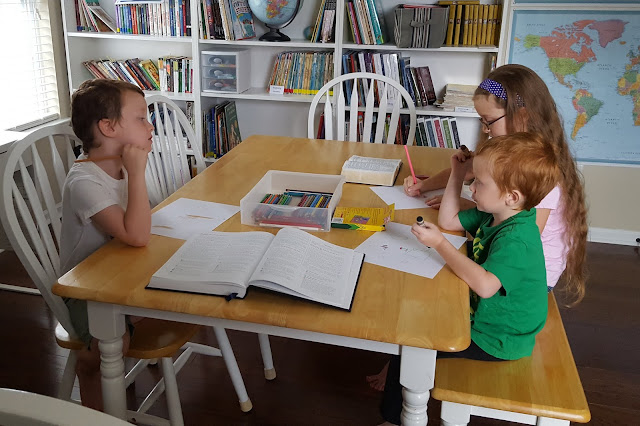 When John tells us that we should not love the things of the world (1 John 2:15-17), we stopped to discussed what that meant, and the Belle (8) commented that sometimes she gets distracted and forgets God, but doesn't really forget him, but just isn't thinking about him at that time.

After our scripture reading, she and the Gent (6) wanted to sing the hymn "Love One Another", then because the 4-year-old heard the word "eternal" at the end of chapter 5, he remembered yesterday's church lesson and wanted to sing "Families Can Be Together Forever", so we did. I'm glad that while listening to the scriptures, it can help trigger a thought or song in their minds.

After our scripture reading, I moved on to history. I read "What is History?" out of our Story of the World book, then we read this sweet book titled Homeplace by Anne Shelby, in which a grandmother tells her grandchild her family history and of the house they live in that has been passed down for generations. 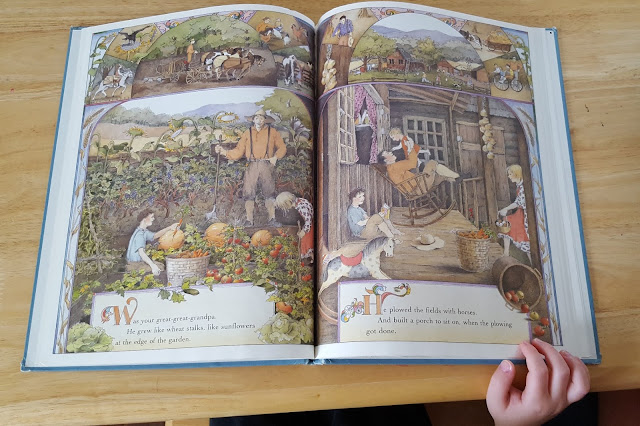 After history, the older two jumped right into math. They picked up where they left off with no problems. The Gent (6) watched another math video to begin a new lesson and the Belle (8) completed worksheets that she hadn't finished from before. 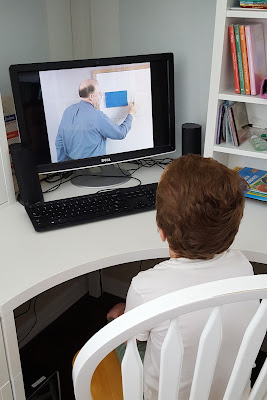 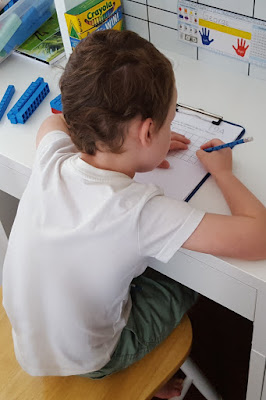 I also worked on writing and grammar with them. The Rascal was given free time in which he asked to watch Little Einsteins. After this, we all had lunch, which was cheeseburger wraps, fries, and apples.

After lunch, we got started on Geography. This year, and for the next few years, we are studying World Geography. I've chosen to do this alphabetically rather than by continent. It will take awhile, but the children are very excited about it. For our first day of school, we made "passports" to include "stamps" (flag stickers) for all of the countries we learn about. Before we began, I had them take awkward passport photos. 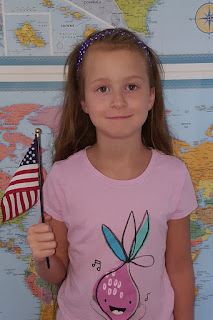 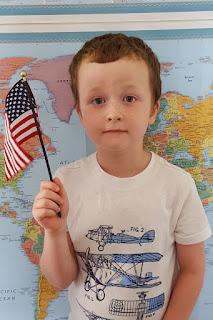 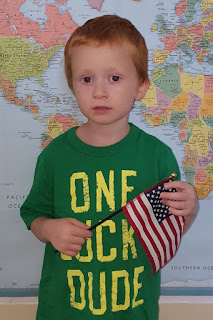 Then we glued our photos into the passports, and filled them out. 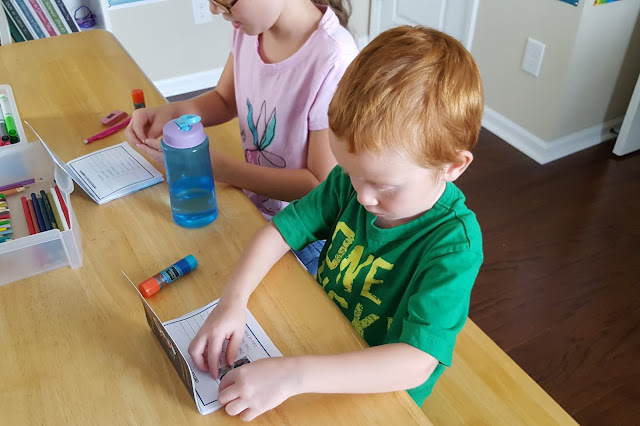 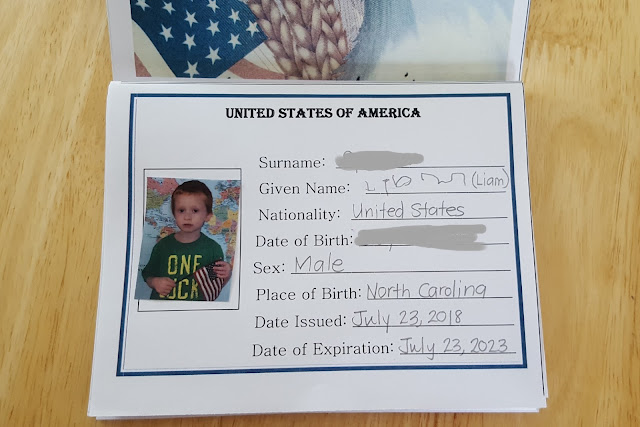 After making our passports, it was time to think about what we may need to take with us as we travel the globe. The children came up with a variety of things to pack in their suitcases. The boys chose their Teddy Bears to bring along and the Belle wisely thought to pack a comfy pillow. 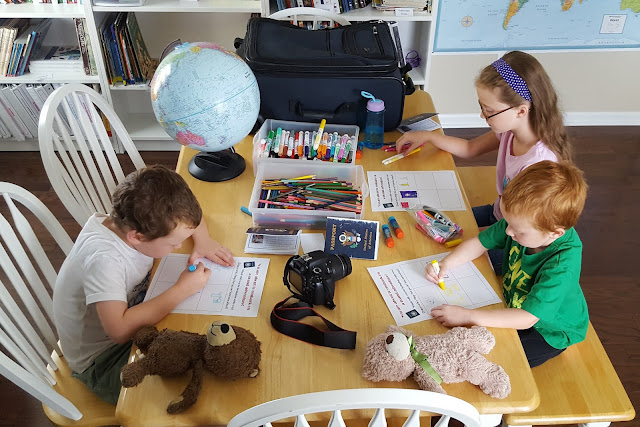 They're excited to be heading off on their first adventure! 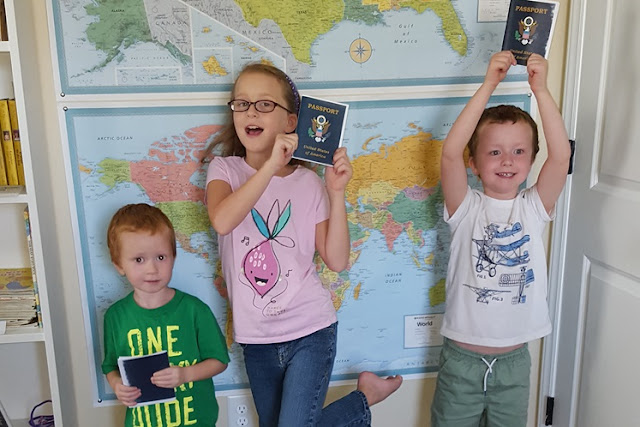 After geography, we sat down to our very first "Afternoon Tea". I was not sure how this would go, but the children amazed me. We first learned tea etiquette (which they did their very best with), such as how to stir their tea in a back and forth motion rather than round and round and how to hold the tea cup (a difficult task for little hands and delicate teacups). As our family abstains from drinking traditional black tea, we instead enjoyed "wild berry zinger" herbal tea, along with cucumber sandwiches (which my 8 and 6-year-olds loved), peanut butter and banana sandwiches (made special for the 4-year-old), and sliced oranges. 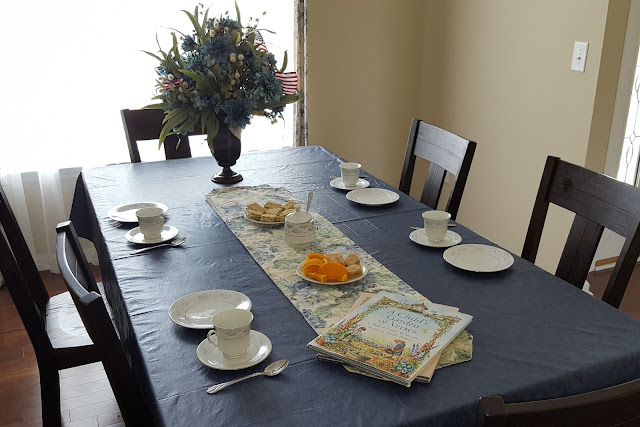 All three children did so well minding their manners, nothing broke, and we sat at the table and enjoyed one another's company for about an hour. I did manage to read four poems that they listened quietly to. 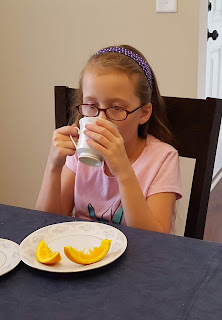 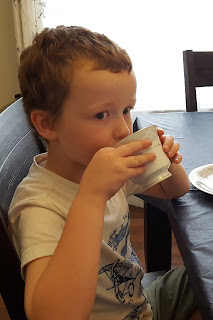 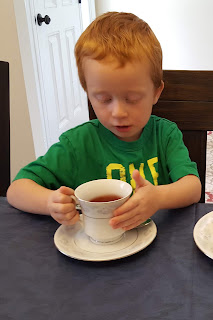 We then moved on to science. This is our trickiest subject this year, as we are doing two different sciences. We are doing Elemental Science's "Exploring Science", a curriculum for pre-k, and we're also doing Biology for the Grammar Stage. I felt it important to give the Rascal (4) a foundation of science with the basics, and the older two didn't want to be left out of his fun experiments, and I knew the 4-year-old wasn't going to sit out of learning about animals and the human body. So we'll do two days of one science, and two days of the other. The older two have agreed to remain quiet and let him answer all the questions for his science lesson as long as they get to be involved in the activities and experiments. We started with the pre-k science and learned about observation. With it being rainy outside, we were not able to go on our backyard observation trek, so we simply stayed inside and colored our worksheet. 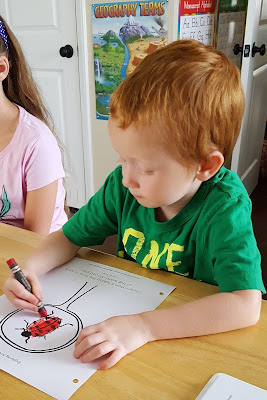 The children enjoyed their first day of school so much. Their favorite part was afternoon tea.