We had a birthday to celebrate this week! It's probably the least exciting birthday in our home, as it was mine. I'm not too big on celebrating my birthday. It's not that I'm ashamed of my age or that I'm getting older (I just turned 30, by the way). I'm just not a center-of-attention type of person. I don't need gifts, parties, pampering, etc. The kids tried to be more well-behaved for me though, which is always nice. Bridget made me a card. We went out for dinner to my favorite Thai restaurant, then came home and had cake. The cake was actually a 4th layer that I didn't use for Liam's birthday cake in July. I put it in the freezer and figured I could whip up a batch of frosting, plop the one-layer cake onto a plate and frost it. And that's exactly what I did, at 7 o'clock in the evening on my birthday. And only because the kids really wanted cake.

It was our first week back to school! Can I just say how much I love not needing to get the kids ready in a hurry to take them to school each morning? If I want to snuggle with the children in bed for an extra 20 minutes, I can (and I did). We still started school at around 8:30 every day this week. Sometimes earlier, sometimes later. The new subjects were implemented nicely. George and Liam behaved enough for me to instruct Bridget. It was a good week.

Because we had taken a 3 week break from math over the summer, Bridget had a little trouble with the beginning of her new book. We've been working on the hundreds place value and using her math manipulatives. She's great at building the numbers but when it comes to saying them, she confuses herself by saying "thirty-twenty-five for 325. Now she is finally saying "three-hundred-twenty-five", at least most of the time. It really throws her off when I add a 0 in there. 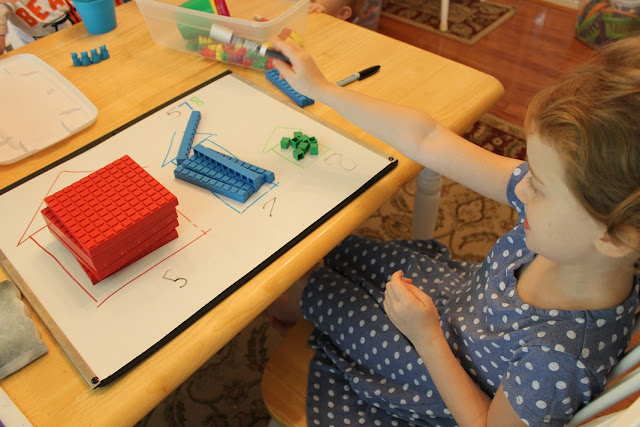 George has a good time building puzzles and playing with whatever math manipulatives Bridget isn't using. He's not using those for counting purposes and instead builds towers and bridges. Whatever keeps him busy! 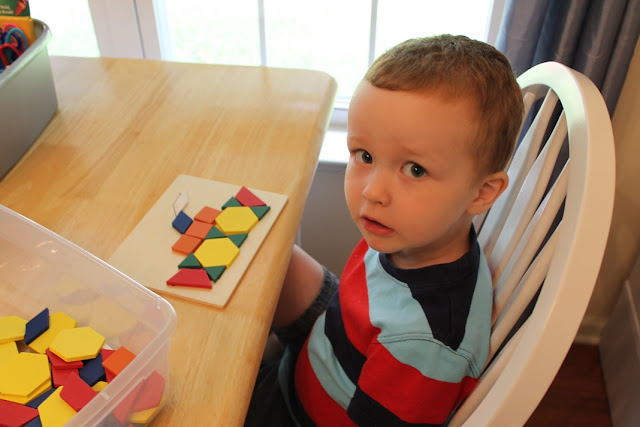 This is a new subject we've added this year. I think Bridget has enjoyed the first 5 lessons, as they have to do with writing the first letter of the word or circling pictures of objects that begin with the same letter. Fun stuff. Next week, we begin with our first spelling list. 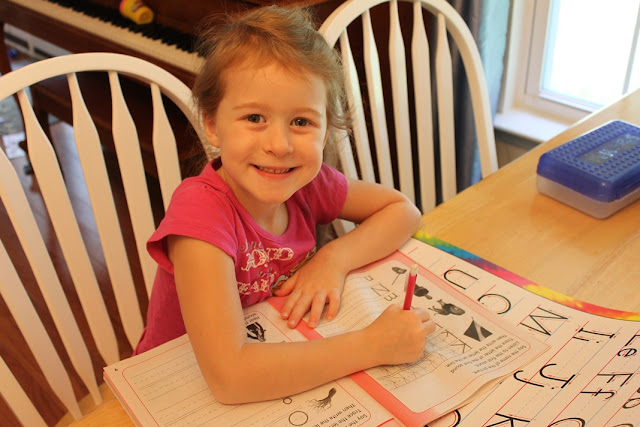 This is also a new subject this year. We learned what a common noun is, and learned proper nouns later in the week. I'm actually two lessons ahead of where I had planned for us to be because I had been doing a lesson each day when in my schedule, I only need to do it three times per week. As Bridget likes to say, "Silly Mommy!".

While we did handwriting in kindergarten (and we are still doing it this year as well), we're also doing writing. Our copywork and narration exercises this week came from The Little House in the Big Woods. Bridget loved the excerpts and wanted to hear more of the story so it looks like I'll be reading The Little House on the Prairie books to her soon (although I don't know how I'll squeeze these in with all of the other books we're going to be reading). 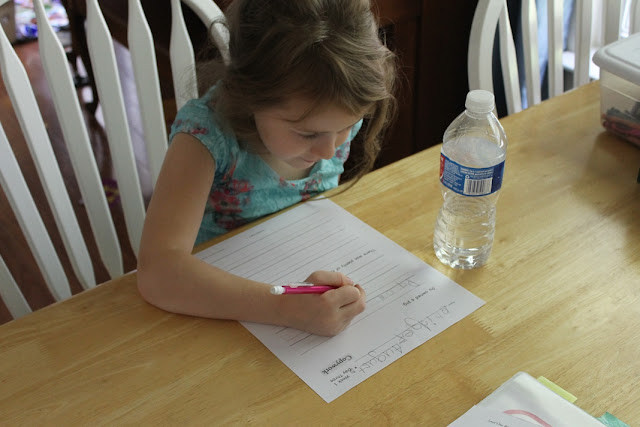 We began the week learning about history and historians. The kids each made a timeline of their lives (so far) and we read a book about family trees. We also learned about archaeologists. Bridget enjoyed the books for these and made me read them again later in the week as our "for fun books". We then learned about nomads and read some books about them. We had briefly done this last year, so it was more of a review. Next week is when we begin covering the exciting stuff: Egypt! 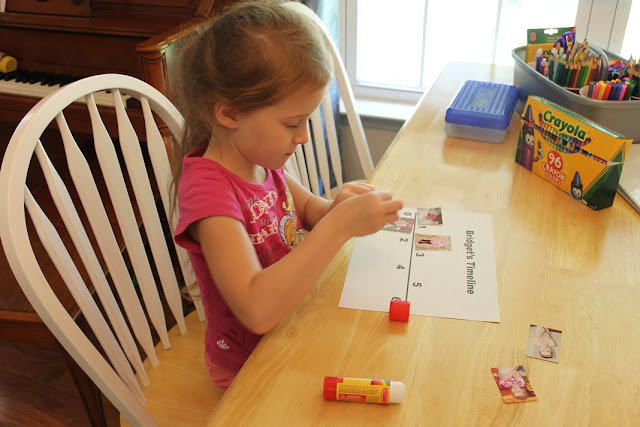 We learned about animal habitats. We will continue this through next week. I was very disappointed that our library didn't have a good selection of habitat books, so I think I may be ordering some from Amazon. I hate to spend that much money on books but the one's I have found look interesting and child-friendly, so hopefully the kids can look through them for fun. Or I might do something entirely different. We'll have to see.

Me and My Family Tree
Archaeologists Dig for Clues
The Magic School Bus Shows and Tells: A Book About Archaeology by Joanna Cole
One Small Blue Bead by Byrd Baylor
The First Dog by Jan Brett