We made a trip to the library this week and I was able to get a lot of books we'll need for the first week of school. We also got a pile of "for fun" books to read. Sometimes I feel I should be bringing a wheelbarrow to the library to help us get back to the van. I love that my kids enjoy being read to, but it is such a heavy task.

School starts in just over a week from today (we begin the first week in August) and I am frantically purging, cleaning, and organizing the homeschool area. My in-laws donated their old kitchen table to us so that we may have a nice area for Bridget (and George) to do their work without a little Liam grabbing at everything. It's the perfect size and we are looking forward to our new work space. It is chaos at the moment, but progress is being made! I am determined to begin this school year with not only an organized school room, but a clean/uncluttered house as well. Yesterday, I filled up an entire trash bag of just paper. I've also been packing up books and other supplies that I know we will not be using this year. That little guy in the bottom corner has been "helping". 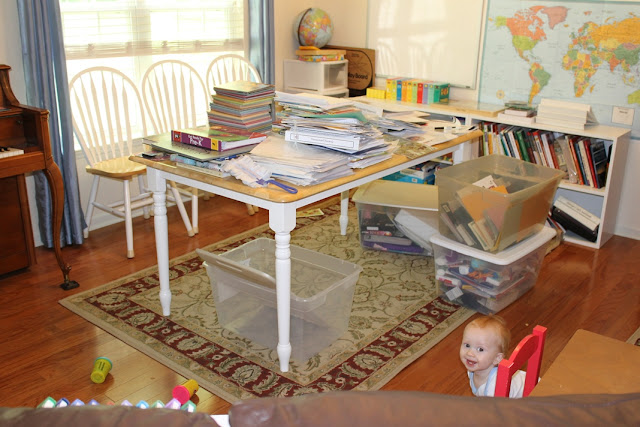 Bridget is anxious to start school. She has seen all of her new books and now her new table and is beyond excited about everything. She tells everyone that she is going to be a first grader this year. George just can't wait to color while Bridget does school.

If you missed my post on our curriculum choices for this year (first grade and preschool), you can check it out by clicking here.

Nothing too exciting going on right now day-to-day, but we did take an exciting family field trip.

We went to Colonial Williamsburg! It was only for two days but we had a blast. We are fortunate that it is only a 3 hour drive from where we live. The kids did great during the drive and we started our historical adventure at Jamestowne.
﻿﻿﻿ 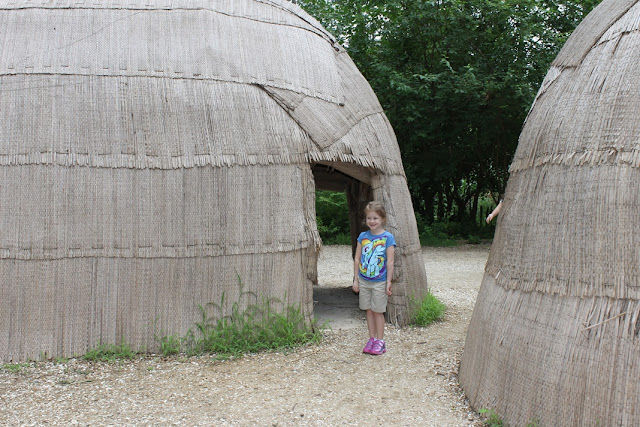 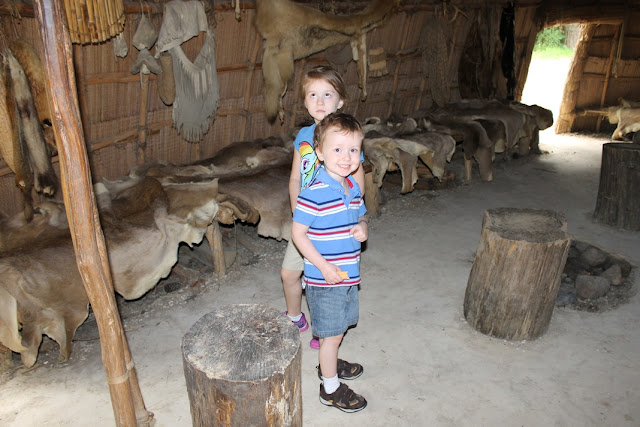 This captures Bridget's feelings about all of the animal skins hanging everywhere. She knows and accepts that is what people had to eat back then, but it still made her uncomfortable. She was glad to get out of there. I love how compassionate she is but I wish she hadn't been so bothered by it, as it is a part of our history.

Making cornmeal outside was much more fun!
﻿

Next we headed to the ships and toured a replica of the Susan Constant. There are actually three ships to tour (the others were Godspeed and Discovery), but this was the biggest and we felt that by seeing one, we've seen them all (we had also toured the Nina and Pinta replicas a few months back so we've had our fill of ship tours for awhile!)
﻿﻿ 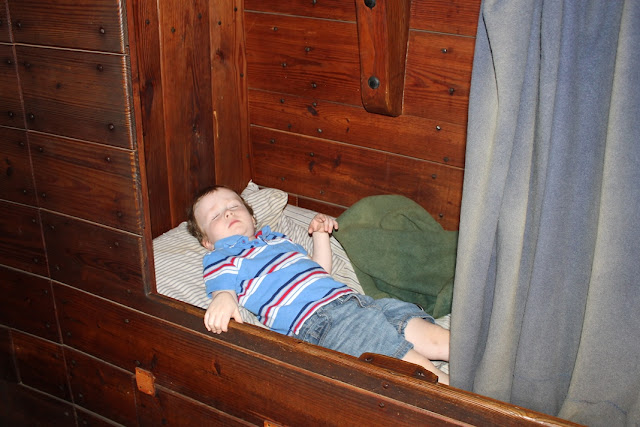 ﻿﻿
George thought it was a good time to take a nap in the officers' cabin.

The next stop was Fort James. Some older boys were finishing up a week-long summer camp and took part of a "battle" we were able to witness. One of the leaders talked to us bystanders about the camp and what the boys did all week. My husband admitted to me later that he wished he had gone to a summer camp that awesome! The boys did a great job.
﻿ 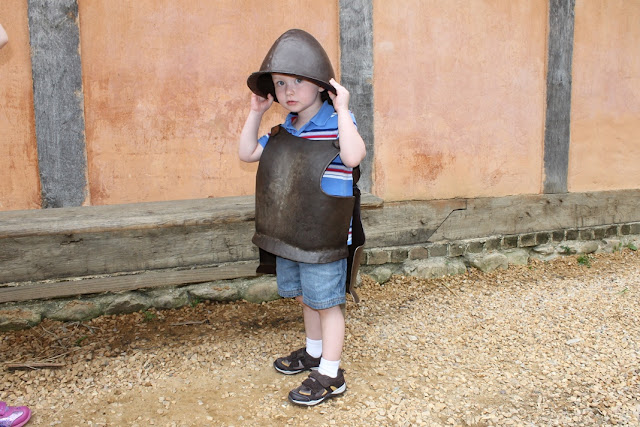 George was precious wearing his military armor. Being a soldier, I'm sure he wasn't going for "precious", but I'm his mom and I call it like I see it!
We finished up at Jamestown in the afternoon and felt it was time to check in to the hotel.
There was so much more to do at Jamestown and we'll have to go back when the kids are a little older (maybe in 3 years when we cover that time period in history).

At the hotel we had some time to kill before going to dinner so we went for a swim! We had the entire pool to ourselves and he kids had so much fun. Then we went to dinner at Food For Thought.

After a good nights rest, we were off to Colonial Williamsburg. We toured Great Hopes Plantation on the way to the city. They had a good sized garden where the women worked and the men were in the tobacco field. As enjoyable it is to have a nice big garden to tend to, I'm glad that I live in todays age where I have a water hose to water the garden rather than carrying a heavy water bucket back and forth from a water pump. Also, if my garden fails, there is always the grocery store.

When we arrived at the city, one of our first stops was the military encampment. I have no pictures of us being trained with our muskets, as the sergeant would have yelled at me if I stepped out of line. Haha. Our sergeant was very much in character and we had a good time (except George, I think he was feeling a bit intimidated so he just stood frozen in line). We then moved on to another part of the encampment where Bridget learned to wash clothes. The kids then picked fresh green beans from the garden for the soldiers. 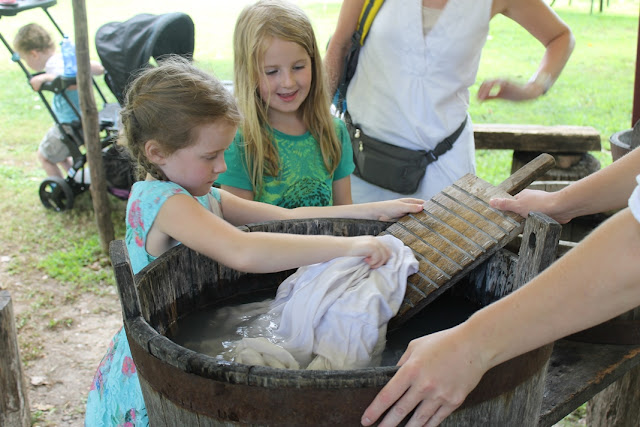 There was so much to see and do and I stopped taking as many pictures so  that I could enjoy everything with the kids. We toured the capitol building, various shops, houses, and then finally the royal governor's palace.

Another highlight of the day in Williamsburg was this woman: 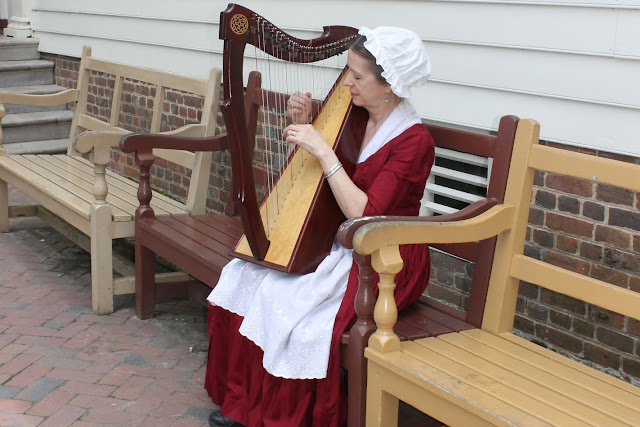 She played this Irish harp so beautifully and when Liam began watching her, she started playing "Twinkle, Twinkle Little Star" for him. I could have listened to her play all day. I wonder how much one of these harps would cost so that I could have Bridget learn to play it for me. Wouldn't that be lovely!?

We spent a lot longer at Williamsburg that we thought we would, so we were unable to make it to Yorktown to finish our historical adventure. We did, however, drive on the Colonial Parkway toward Yorktown after dinner before we made the drive home.