We began BOB Books Set 2 this week. There are a lot of new words to sound out and she wants to grab Set 1 again just to get her reading done but I told her that she needs the practice and to move on to the next level. I have every bit of confidence that she'll catch on to this set the same she did with the first one.

Bridget had her first "formal lesson" this week. Well, as formal as it can get being taught by her mother. She took it very seriously this time (we attempted the piano a year or so ago and I felt she was not quite ready). So far, we are working on finger placement and getting her fingers used to playing by doing some exercises hitting notes C-G using the correct fingers 1-5. (I have no idea if that sentence makes sense, but that's what we're doing!) We are doing the same with her left hand, but of course in the other direction. The first day was a struggle but she goes to practice on her own each day since. She has picked up speed and does a great job. The notes seem to flow nicely and I think she notices the improvement. Because these exercises were not enough for her, I did teach her to play Twinkle, Twinkle. This needs more work but she studies the keys until she gets it right (all on her own). 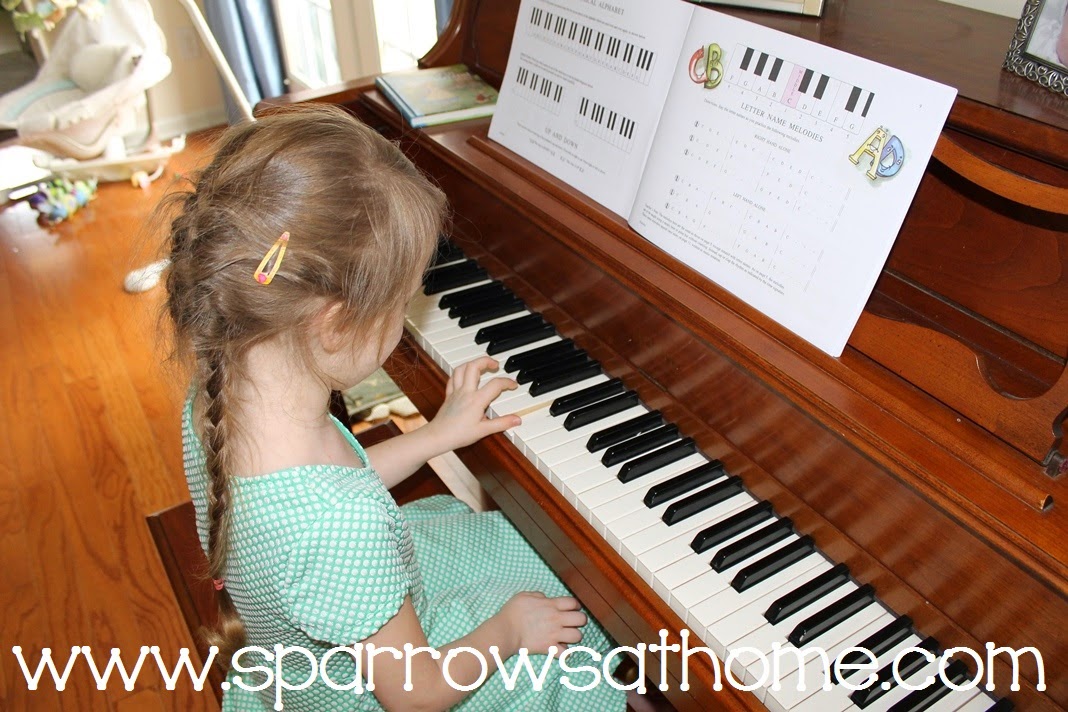 We are still reading Alice in Wonderland. This book is taking a lot longer than the others because it is so... unreal. Bridget has a lot of questions and seems to think that every character in the book escaped from the looney bin (they did). As the reader, I am not enjoying the book. It is not my kind of story. I asked Bridget (hoping she'd say yes) if she wanted to stop this book and read another one but she wants to continue. So continue we shall. We are almost done with the first story and then will be starting on "Through the Looking Glass" in the second half of the book. Perhaps when Bridget is older and can read the book on her own, we'd both enjoy it more. George is completely lost with the story so he instead plays quietly while I read.

We're all excited that Spring has arrived. I am so tired of the cold weather. I am not looking forward to the allergies. Some years I am unaffected, and in other years I am down for a week. We'll have to see how this year goes (although since switching to a plant-based diet, they have not been nearly as bad as they used to be).

Week in Review: Reading in Wonderland

Bridget finished up BOB Books Set 1 this week. We also tested to see what grade level she's reading at (only to make sure she's not falling behind). She is currently reading at a 1st grade level, and she knew many (but not enough) of the words to put her reading at a second grade level. We're almost there, but I'm in no rush. She's doing great for her age so we'll just keep on doing what we're doing.

George has decided that he wants to start reading too, so we started on My First BOB Books: Alphabet. We're not doing any scheduled reading lessons for him (although he's usually present during Bridget's lesson), but I'll do the books with him whenever he bring them to me. Some days we don't do them, and other days we spend a lot of time practicing the letters and looking at the pictures.

Last week, the children had an argument a disagreement about which book to read next. Alice in Wonderland won because on the evening we were to start a new book, George fell asleep early.

While reading these stories to Bridget, I cannot help but wish I had never seen the movies. The books are way better and the movies don't stay true to the story (except for The Secret Garden... that movie is still mostly accurate). An even bigger regret is that Bridget has seen most of the movies (Cinderella, Snow White, Sleeping Beauty, etc.) and she is always comparing the book to the movie. At first she tried telling me that the book was wrong. I assured her that this was not the case, and that the people who made the movie had obviously not read the book.

Next week I had scheduled for us to have off, but because we are not where I want to be with our lessons, we are having school. With the things that went on this week, we neglected to do a states study. I only hope that next week will be less blah.

Over the past two months, we have been battling a severe drool rash with Liam. The first photo was taken back in January, around the time it began. He woke up one morning with blood on his pajamas. By the time we got him to the doctor, it was already looking better so the doctor said to use Aquaphor on his cheeks and chin to keep them from getting irritated and to use hydrocortisone cream when it developed into a rash. This worked for a little while, but then the rash would come back and the Aquaphor seemed to have stopped working. The rash would usually look the worst over the weekend and by Monday it would be healing. This last weekend, however, he was miserable and itching, trying to scratch his chin on anything he could (usually my shoulder). His rash developed into sores with blood and puss. I took him in to see the doctor on Monday morning. She prescribed a steroid cream and also gave us some tips for the eczema. I do hope that this continues to do the trick. I'm glad I am able to kiss those chubby cheeks again.
﻿﻿ 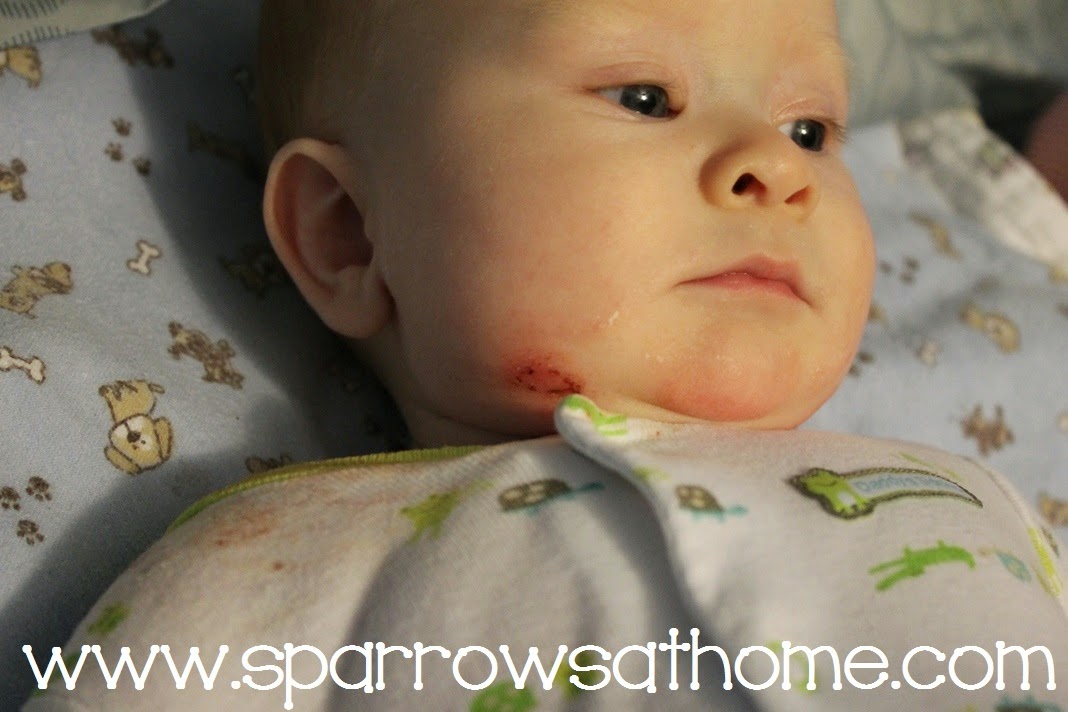 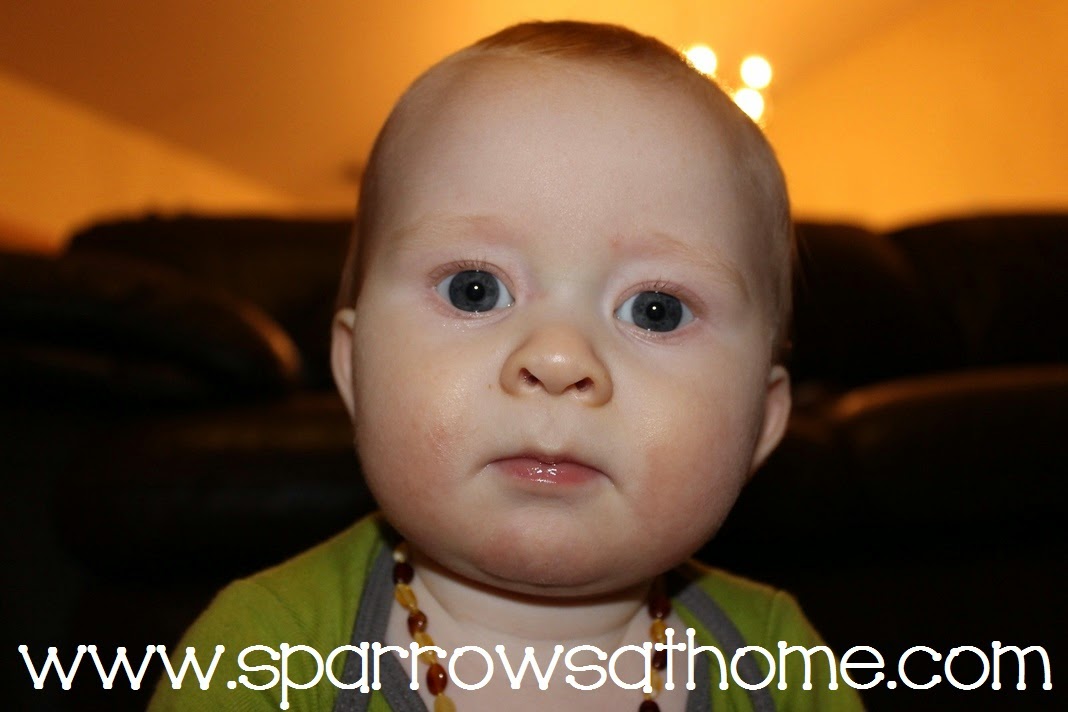 On Wednesday, we experienced some unusually warm weather. The temperature got up to 80 degrees!  Unfortunately, we had gotten behind with school and so we stayed indoors but opened all of the windows in the house. George pushed off all of our school books and papers from the top of the bookshelf so that he could have a seat to watch the birds and enjoy the fresh air. I forgave him for the mess on the floor and let him enjoy his afternoon. 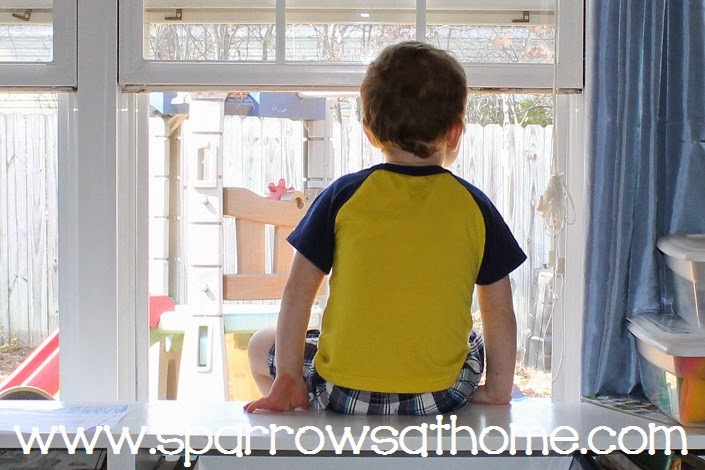 We covered New Jersey for our states study. So far, Bridget has remembered the capitals and the locations on the map of the states we have covered. She is very proud of herself. Because we like food in our family, we usually prepare a dish that either originated in or is popular in the state we are covering. New Jersey has a treat called "disco fries", which is an Americanized version of the Canadian poutine. Poutine calls for brown gravy and cheese curds on fries. Disco fries calls for brown gravy and mozzarella cheese. I did not know what either of these dishes were, but I am glad we made it. Because of our diet, I made a mushroom gravy and vegan mozzarella cheese sauce for the fries. The kids really enjoyed it and we'll probably make it again. 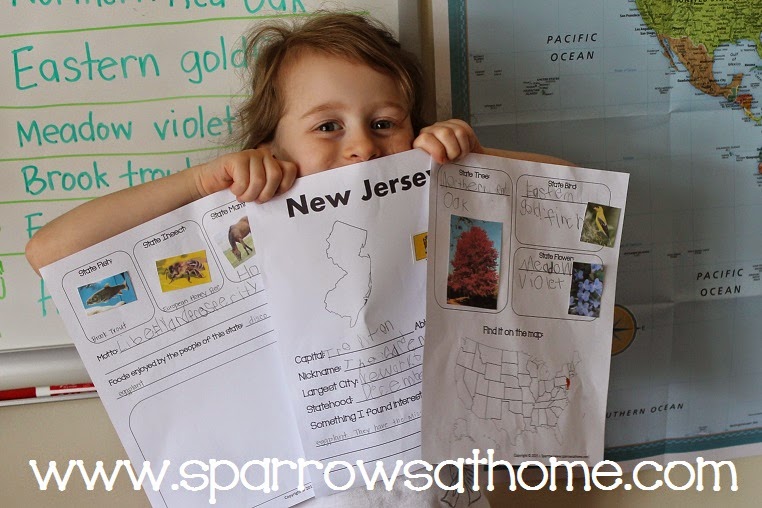 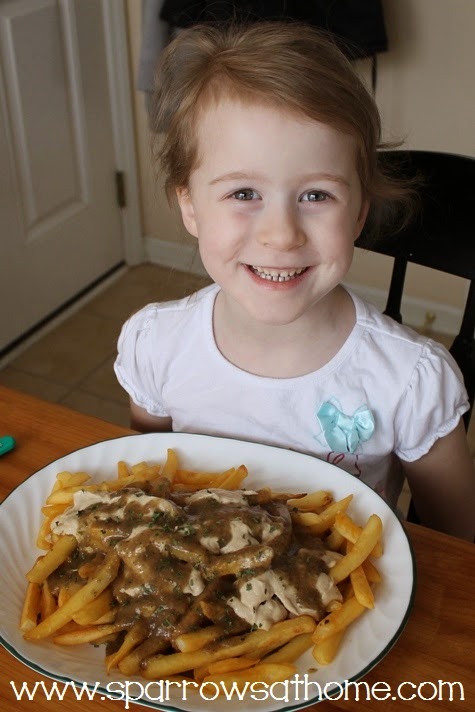 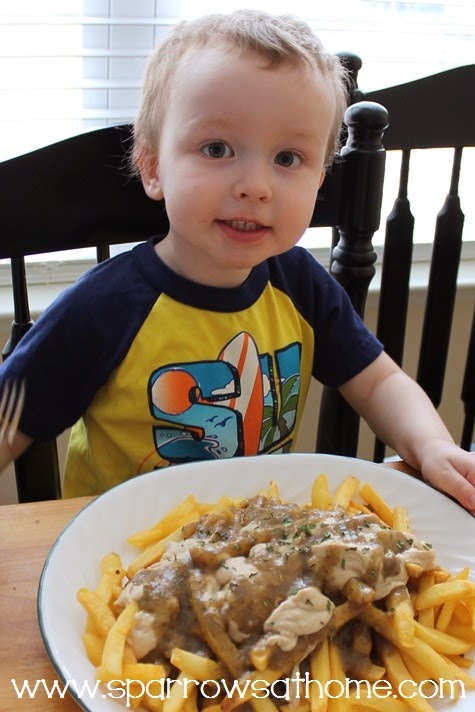 Bridget is learning to skip count now. This week she learned how to skip count by 2s. She caught on quickly and it turned out to be a very quick lesson. We nearing the end of our math book for the year and I may need to purchase the next level before the school year is up.

George is becoming more interested in joining us for school. Every time I start any lesson with Bridget, he drops his toys and comes running, saying, "Me too, Mommy! I do school too!". So we're counting bears and making patterns while Bridget completes her math work. He is also (sort of) doing the vowels poem and consonants rhyme with Bridget. He doesn't understand what he's saying but he sounds cute when he says it. As far as the other subjects go, he really just shows up for the food.

We finished The Secret Garden. Bridget loved it and talks about India all the time now, even though the main character was only in India for a short time. We've been reading a few Berenstain Bear books I picked up at Barnes and Noble when went to buy more Classic Starts books. We are undecided what I will be reading to them next. George wants me to read Peter Pan and Bridget wants me to read Alice in Wonderland. I could do both but the fighting is over who gets their book first. I am glad they love being read to but it makes it less fun for me.

I've decided to continue with homeschool through the summer. I had originally decided on finishing in May and starting back up in August, but things happen and we get behind. We also enjoy it so much (most days) so why would I want to take that away during the summer? I'll be sticking primarily with reading, writing, and math and let Bridget decide what else she wants to continue doing. If nothing else, then fine.