We experienced more snow this week. This time it was of the fluffy variety, rather than the icy stuff we had last week. Before the snow came, we had a few visitors in our backyard. George called me to the back door to look at the birds. He does this often and I figured they were random birds he was looking at, but when I got to the door, I saw the strangest birds, with very long beaks and plump little bodies. I posted a picture of them on Facebook, asking friends to identify them for me, and learned that they were American Woodcocks and are rarely seen in the wild (at least by folks around here, including a bird enthusiast). We felt ourselves lucky to watch five or so of them digging for food in our backyard. We have not seen them since. 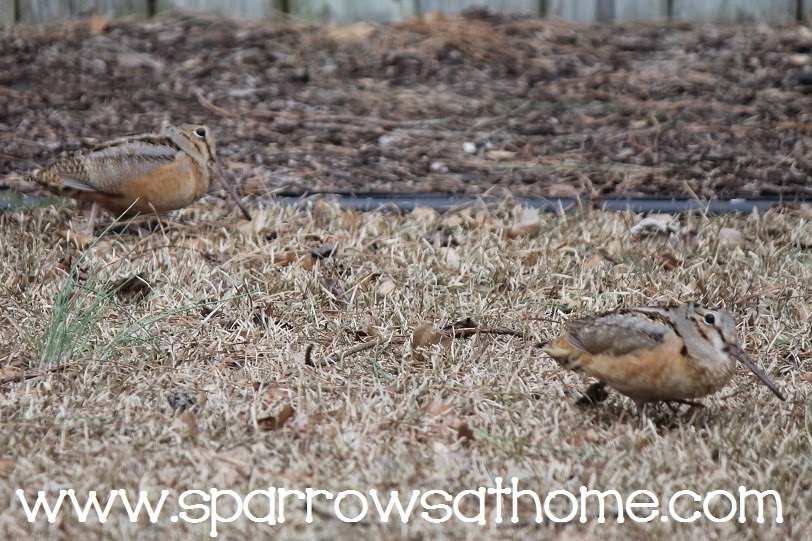 Then the snow came. My parents came over in the afternoon and my dad wanted to take the older children outside to play in the snow. We were unprepared, and could not find George's gloves so he ended up wearing an extra pair of his sisters gloves, and poor Bridget only had a pair of yoga pants to put on to keep her legs warm. But we made it outside. I also bundled Liam up to take some pictures of him in his first snow (again, last week was more of an ice storm and I don't count that as being his first snow.) 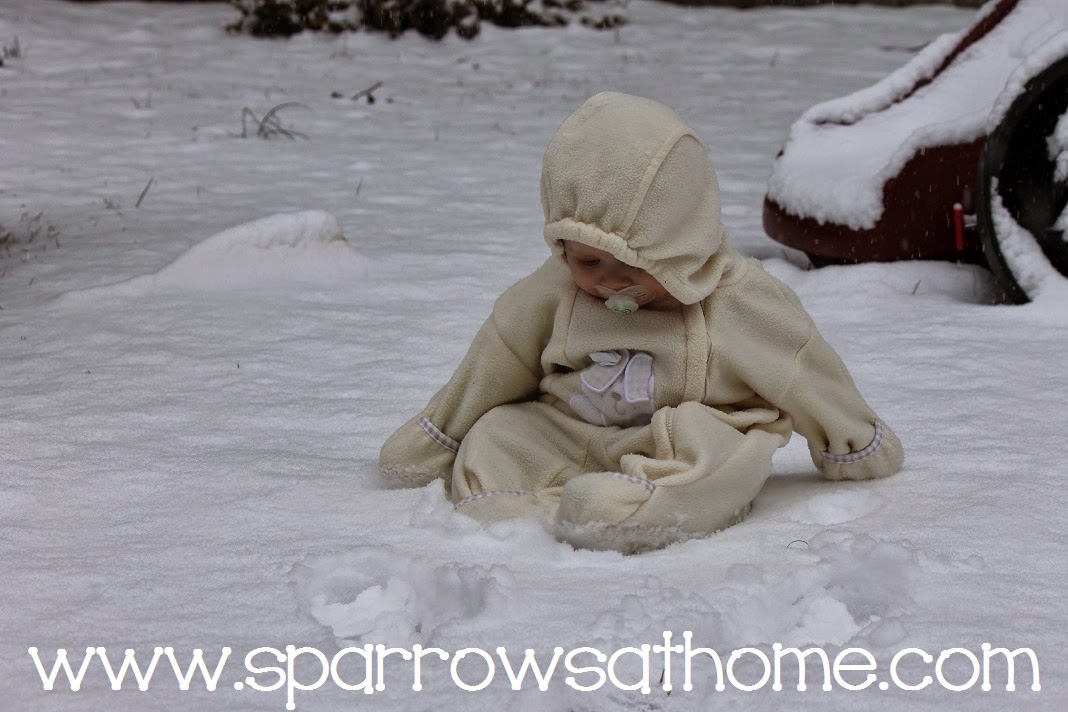 Once out there, Bridget attempted to show my mom that she could swing and didn't think before sitting down on a snowy swing. Needless to say, she quite literally froze her behind. The only picture I got of her was right after this happened. She was not very pleased. Shortly after, she went inside. 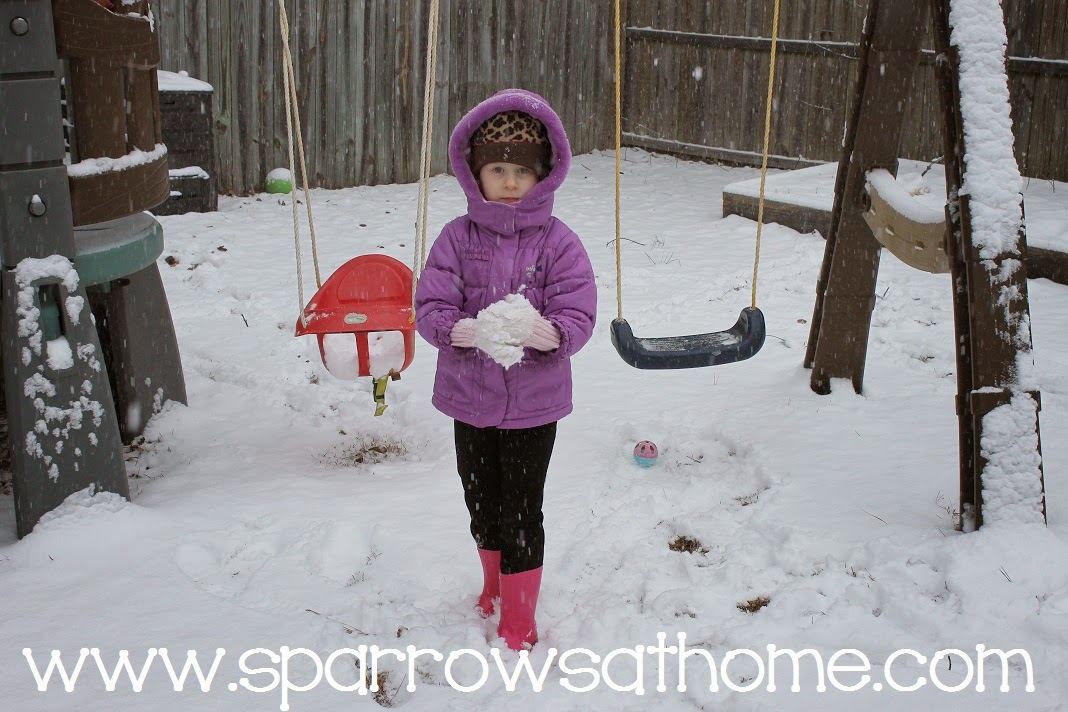 I laid Liam down in the snow and he proceeding to flap his arms and legs, making a baby snow angel, but also had snowflakes falling in his face. I quickly snapped the picture and got him out of the snow. 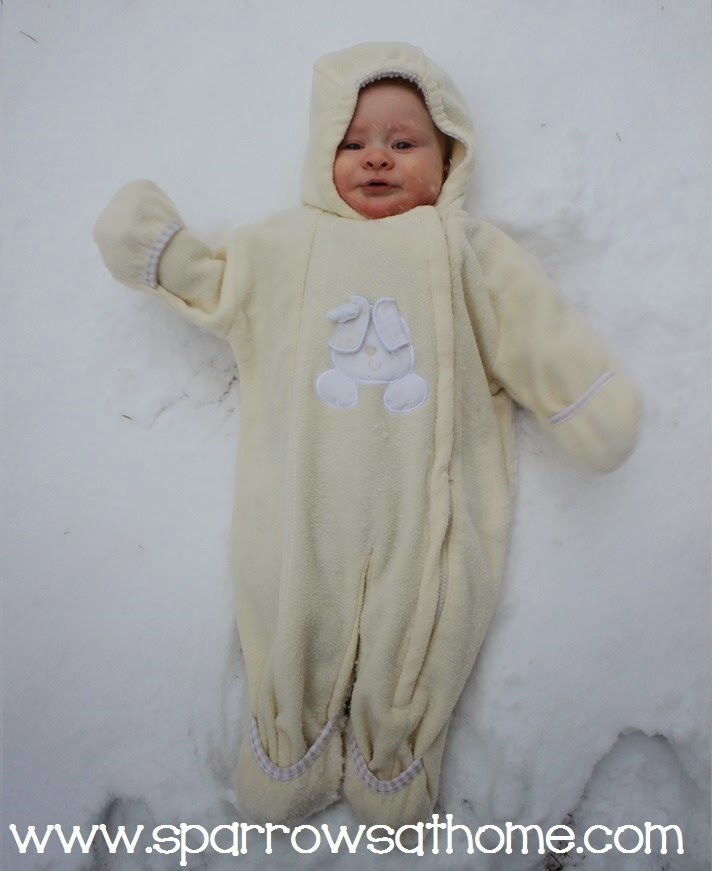 George stayed outside much longer, hitting the swing set with his bat and watching the snow fall, and running around in the snow. My dad finally brought him inside when he figured George's hands must be frozen. They almost were! But he had a lot of fun. 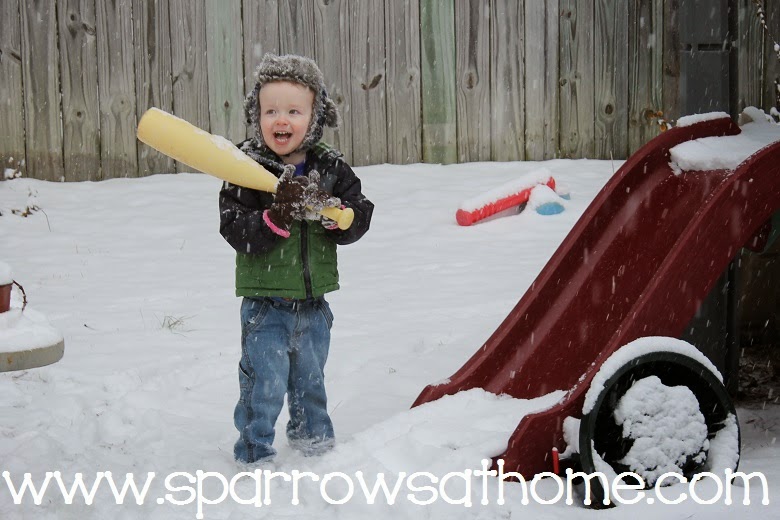 We continued on with our states study and learned all about Pennsylvania. I made my own states worksheets to include facts I wanted to cover and Bridget is excited about putting together her states notebook. 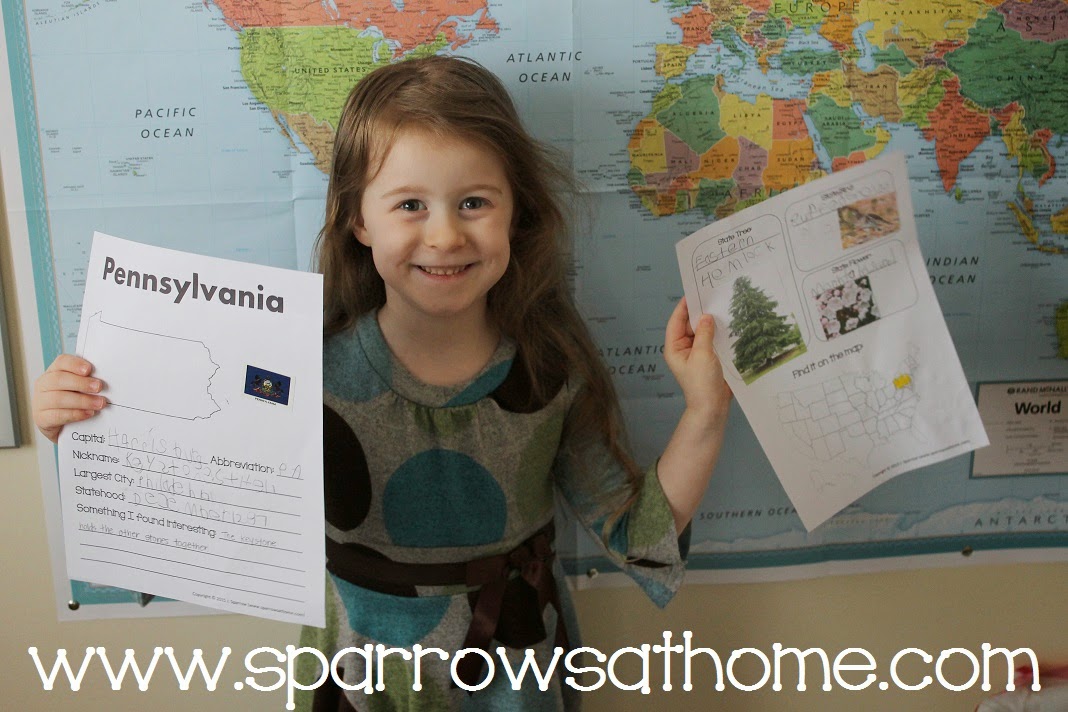 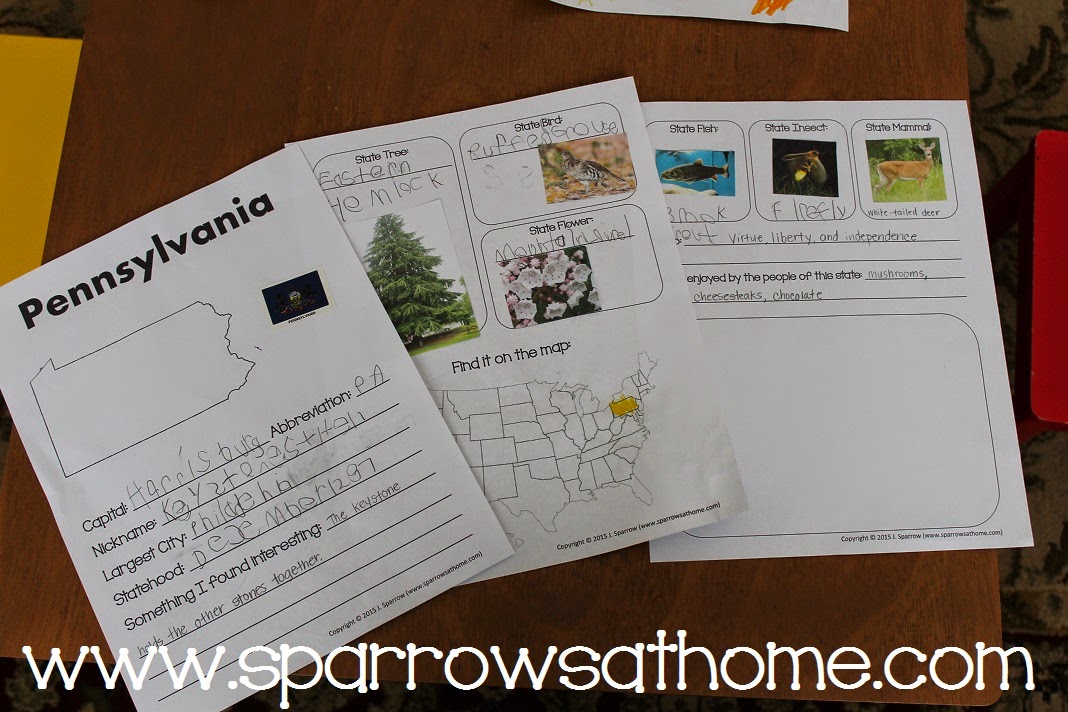 We also made Philly Cheesesteaks for dinner. Bridget loved them. George was more interested in the cheese sauce. 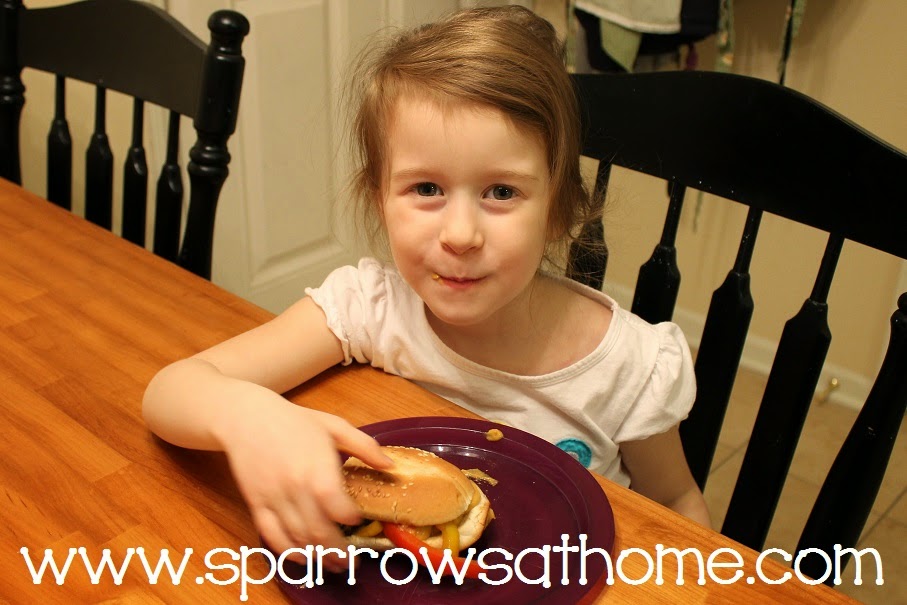 Bridget does so well memorizing her poem to help her read. She knows the poem "The Five Vowels" and we are now working on "The Consonants Rhyme", both of which are found in this book. This is the same that  we've been doing but I am including it here again since Bridget wanted to have her picture taken with our board. One doesn't realize how crooked their writing is on the whiteboard until they snap a picture and post it on a blog. 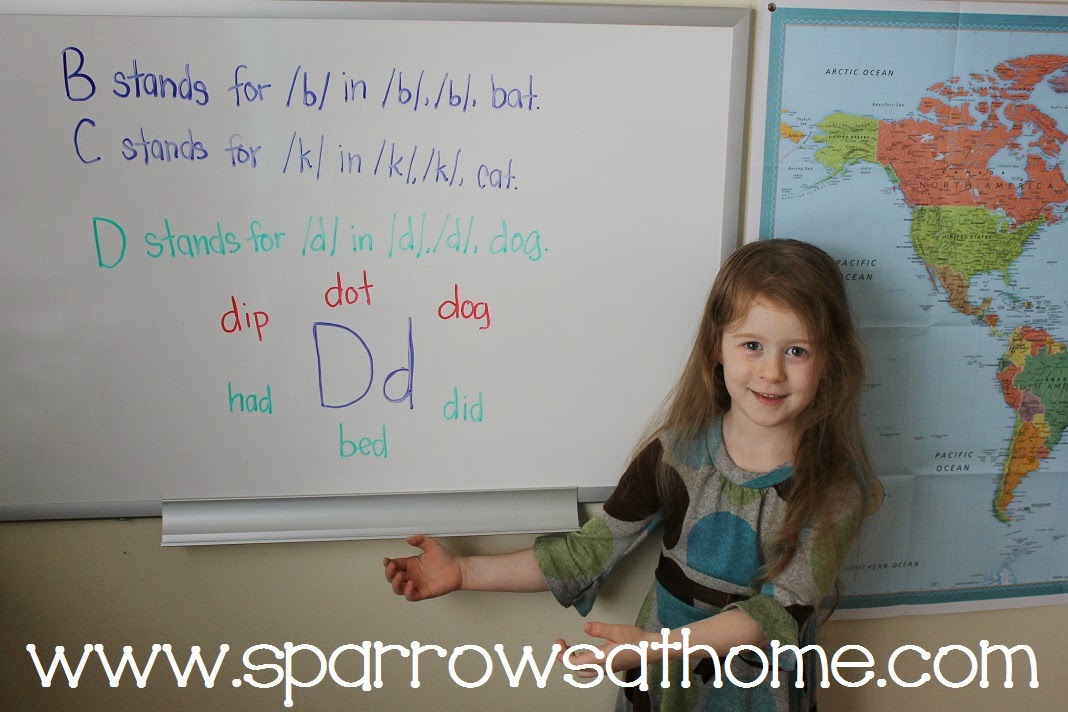 We finished Grimm's Fairy Tales this week and began The Secret Garden. We are still sporadically reading Animal Stories.

Bridget prefers these non-picture books and has not asked me to ready anything else but these. George listens sometimes, but he's still very much into picture books. I am thinking of getting him a boy-themed book in this same series to see if that will get his attention. But he just turned 3 so it may just be an attention span issue.

We had a fun week. Homeschooling with a three-year-old and seven-month-old can be rather stressful at times and I feel like I don't accomplish what I want to with Bridget by the end of each week. I just need to keep telling myself that she's doing fine, we're doing fine, and we'll get it done... some time. Housework can wait. That sounds like a good plan.